The BBC has commissioned a fifth series of Scottish suburban sitcom Two Doors Down, British Comedy Guide can reveal.

Set in the fictional suburban Glaswegian street of Latimer Crescent, the latest six-part series about neighbourly relations will reunite Arabella Weir and Alex Norton as Beth and Eric Baird, around whom all the action revolves.

Elaine C Smith will return as neighbour Christine; Doon Mackichan and Jonathan Watson as the snooty Cathy and Colin; plus Graeme ‘Grado’ Stevely and Joy McAvoy as the street’s newest residents, Alan and Michelle.

Jamie Quinn and Kieran Hodgson will also reprise their roles, as the Bairds’ son Ian and his boyfriend Gordon, respectively.

First aired as a Christmas/Hogmanay special in 2013, its popularity saw four further series follow from 2016. The series has also won multiple awards, including a Scottish BAFTA for co-star Elaine C Smith.

Produced by BBC Studios, the sitcom is written by Simon Carlyle and Gregor Sharp, and is one of BBC Two and BBC Scotland‘s top-performing comedies, attracting 26.8 million viewing requests on iPlayer so far. 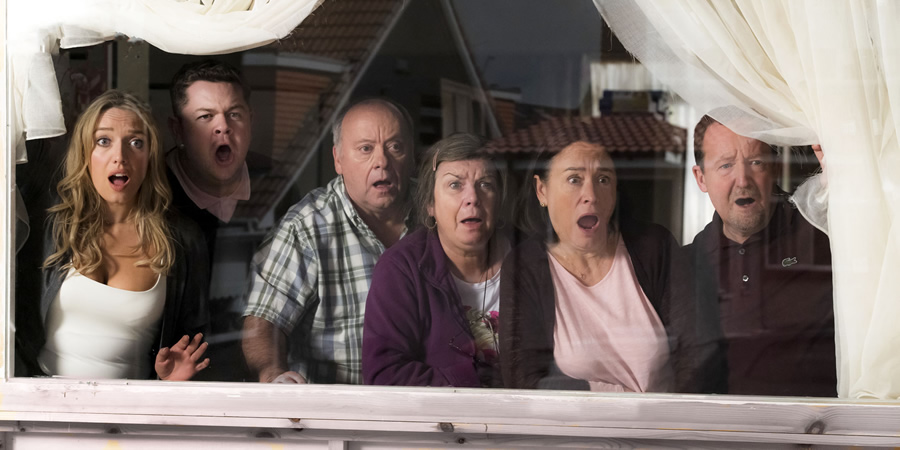 All four series to date, plus the original special, are currently available to watch again via the streaming service.

Series 5 is hoped to film after coronavirus lockdown measures have been lifted, and is expected to broadcast in 2021.

Shane Allen, Controller of BBC Comedy Commissioning, says: “The audience popularity across BBC Two and iPlayer has led to huge affection for a show that now rubs shoulders with The Royle Family and Gavin & Stacey as a firm and long lasting sitcom favourite. The writing is so precise, the characters burst with comic vitality and the performances are a masterclass in comedy delivery. Poor Eric, what fresh hell is he in for?”

Steven Canny, executive producer with BBC Studios Comedy, says: “We’ve been cruelly torturing poor Beth and Eric for the last 7 years and couldn’t be more delighted about having another go. Two Doors Down is a brilliant show to make, a genuine delight from start to finish, and I can’t wait for the audience to see what we have lined up for Series 5. Some overbearing neighbours may be involved.”

The Star Wars Cast Responds To Star Wars Memes | The...

Lenny Henry to front Gold series about comedy and race

A rallying cry for acceptance: how the Tony awards brought the...

James Franco Tricked Judd Apatow into Playing Himself in The Disaster...