Glasgow is to get a new 400 seat comedy venue.

The Glee, one of the UK’s most successful independent comedy club chains, is set to open a new venue in the Scottish city in February 2019.

Currently under renovation at a site on the city’s Renfrew Street, the 400-seat Glee Club Glasgow will officially open with a special programme of live comedy performances on Friday 1st and Saturday 2nd February 2019.

The organisers say: “The new Glasgow club will feature all the elements that have made Glee such an enduring success in the live entertainment world: a beautifully designed purpose-built interior, comfortable theatre-style reserved seating with great views to the round Glee stage, plus excellent lighting, acoustics and atmosphere.

“There will be an incredible programme of comedy talent to look forward to each week with The Glee’s Friday and Saturday Night Comedy Show providing the perfect entertainment for the weekend, each featuring four brilliant stand-up comedians.

“The new venue will host one of Glee’s trademark extra-long bars – designed to beat the queues and serve up a great quality mix of drinks, with a focus on pitchers, cocktails plus Scottish craft beers and spirits. With a plan to use local ingredients, a menu of delicious freshly made food will be available, serving up a tasty mix of gourmet bar snacks, pizzas and classic dishes. There will be weekly food deals, plus the handy addition of a pre-order service, meaning guests can relax and look forward to their drinks and food being ready to serve at their table on arrival.”

With a standing capacity of 800, live music will also be part of the Glasgow Glee experience. 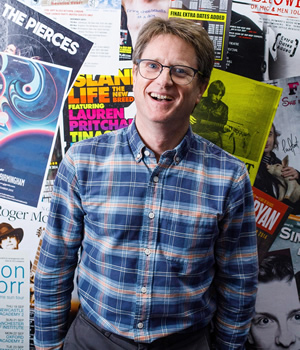 The Glee founder Mark Tughan opened his first club in Birmingham in 1994. The success with this venue led him to build the Glee business with further openings in Cardiff (2001), Oxford (2010) and Nottingham (2010). Glasgow will be Glee’s fifth venue, and Mark explained that Scotland was an easy choice for his next opening: “Scotland has given us some of the world’s funniest comedians over the years, as well as having some of the best comedy festivals and a great culture of coming together to enjoy live entertainment.

“As a lifelong fan of Scotland’s comedy scene, opening our first Scottish Glee Club is extremely exciting for me and the rest of the team. Glasgow is such a vibrant cultural city and there is a huge amount of fresh comedy talent coming through on the scene here, so the anticipation is really building as we countdown to opening in 2019.

“We will be bringing everything that works and is great about The Glee to our new Glasgow venue, with a distinctive Scottish slant – a brilliant comedy line-up every week, great food and drink, friendly staff, plush interiors and a few surprises along the way. It’s a whole night out sorted, and we can’t wait to welcome Scottish audiences and to introduce them to the Glee experience. Roll on 2019!”

Jay Lafferty, Gary Little, Geoff Norcott and “a very special guest to be announced at a later date” will perform on the opening night. Tickets for this show and others throughout February are on sale now from glee.co.uk

The Democrats Debate It Out In Iowa

What Did Sens. Warren & Sanders Say to Each Other?

Jennifer Garner, Reese Witherspoon and More to Appear on 2018 Stand...

Lea Michele Opens Up About Her Exciting Year On and Off...

Betty Grumble: 'I want to tell stories ferociously, from my guts'

NASA Is Testing A Mini Nuclear Reactor To Power Astronauts On...

The Democrats Debate It Out In Iowa

What Did Sens. Warren & Sanders Say to Each Other?

Stewart Lee to publish March Of The Lemmings book