A raft of plans and product re-releases have been announced to celebrate the 50th anniversary of Monty Python’s Flying Circus on 5th October this year.

Promoters say: “In line with the benchmark date, a variety of new releases and events will be taking place including a BBC takeover, a BFI Southbank season, the release of the fully restored Monty Python’s Flying Circus series, a series of new Monty Python radio programmes, and a World Record attempt.”

The Pythons themselves say: “Python has survived because we live in an increasingly Pythonesque world. Extreme silliness seems more relevant now than it ever was.”

On the 50th anniversary date itself, the first official Monty Python Guinness World Record attempt for the ‘Largest Gathering of People Dressed as Gumbys’ will take place at “an iconic London venue”. Anyone interested in taking part should join the official Facebook group.

An initial range of 50th anniversary merchandise is now available through the official Monty Python website, with further products to be announced later in the year. 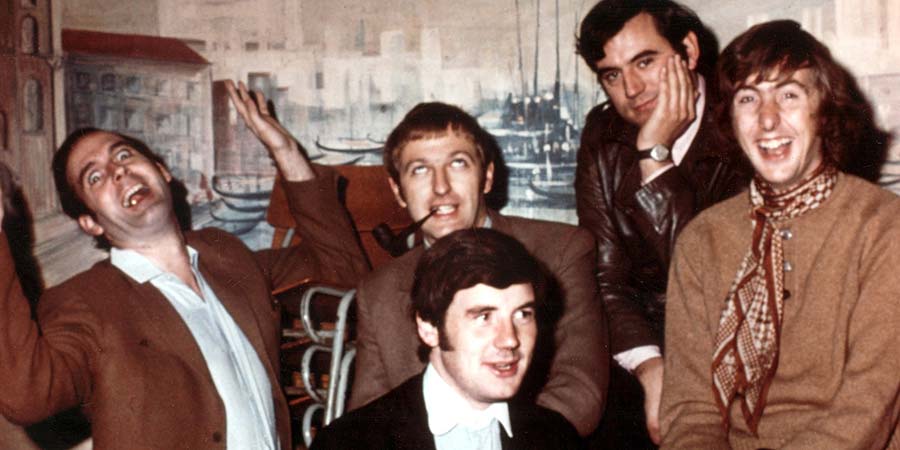 The group’s original, iconic BBC sketch series will be re-released “painstakingly restored” for the first time from the original film and video stock on which it was recorded. Remastered to HD, all 45 episodes – plus “unseen and excised footage, sketches and much more” – will be available on both high definition Blu-ray and standard DVD by Network in a limited edition box set. Pre-orders open on 29th July for a release date later in the year. The show’s four series will be available to purchase individually at a later date.

September promises to be a month packed with celebration, in conjunction with BBC Radio 4 and the BFI.

For Radio 4, Michael Palin has executive produced five new specials featuring “never-before-released material from the Monty Python sound archives”, which will also be aired by Sirius XM in the US.

Producers tease: “Join Michael to find out what John’s mother thought about her care home, the extra unpleasant things that were planned for Eric’s Brave Sir Robin, what exactly Terry Jones is so worried about, and why the infamous Fat Ignorant Bastards have never been more relevant to the world today.” 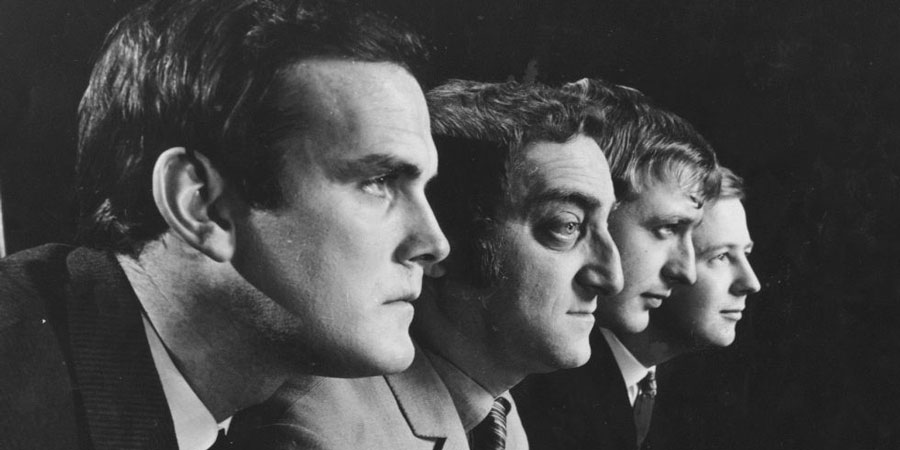 Meanwhile, the BFI will host Python season across the whole month. It’s…Monty Python At 50 will feature all four Monty Python movies; oddities and curios from the depths of the BFI National Archive; back-to-back screenings of the entire series of Monty Python’s Flying Circus “in a unique big-screen outing”; and screenings of post-Python TV (Fawlty Towers, Out Of The Trees, Ripping Yarns) and films (Jabberwocky, A Fish Called Wanda, Time Bandits, The Wind In The Willows, and more).

There will also be rare screenings of pre-Python shows At Last The 1948 Show (pictured above) and Do Not Adjust Your Set, and a free exhibition of Python-related material from the BFI National Archive and The Monty Python Archive. Further details about the season will be announced in July, alongside ticket sales.

Both earlier series are also being released on DVD by the BFI in their complete surviving – and restored and recreated – forms for the first time, including a raft of brand new extras: At Last The 1948 Show – Collector’s Edition and Do Not Adjust Your Set – Collector’s Edition. 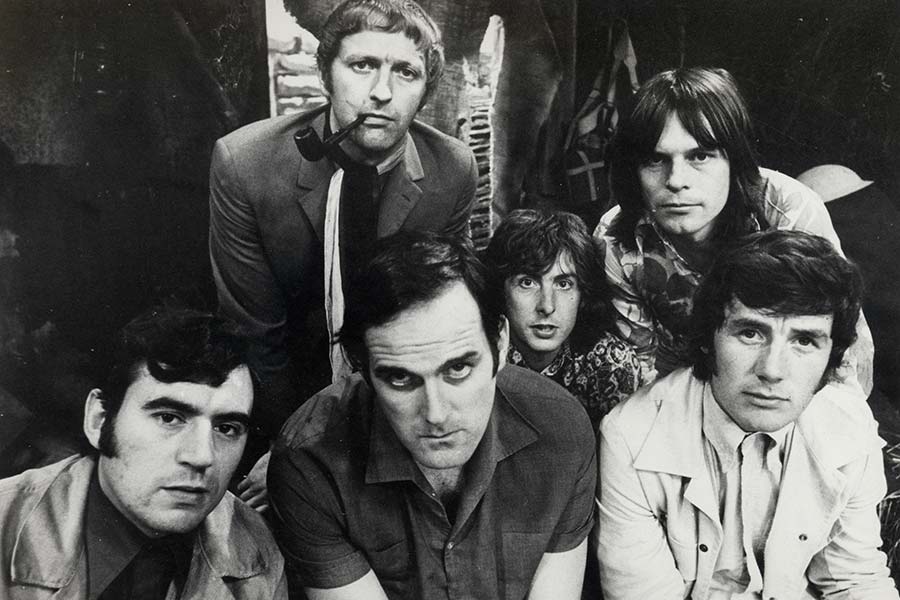 On BBC Two, the group will be celebrated with broadcasts of “defining career pieces” from their archives. Details on this programming will be announced by the corporation at a later date. BBC America will air a Flying Circus marathon, plus the films Monty Python’s Life Of Brian and Monty Python And The Holy Grail.

A further selection of books and records will also be published, including an issue of the best-selling compilation album Monty Python Sings (Again) – for the first time on vinyl – and with the addition of Stephen Hawking sings Monty Python… Galaxy Song, plus new packaging overseen by Terry Gilliam.

All the original Monty Python books published by Methuen since 1971, including Big Red Book and Brand New Papperbok, will be available from 4th October; whilst Carlton will publish a new 50th anniversary edition of Monty Python’s Flying Circus: Hidden Treasures, which includes replicas of rarely-seen documents from The Monty Python Archive.

More information on product release dates and the celebratory TV and radio line-ups will be announced nearer the time.

All 45 episodes of Monty Python’s Flying Circus, on Blu-ray and DVD, fully restored for the first time ever.

Each episode has been painstakingly restored using the original video and film elements exclusively for this release. All four series, along with unseen and excised footage, sketches and much more, will be presented in this exclusive 50th anniversary limited-edition box set.

The complete oral history of Monty Python – one of comedy’s most legendary and influential troupes – publishing to coincide with the 50th anniversary of their BBC debut, with a foreword by John Oliver from hit US satire Last Week Tonight.

“Gilliam is one of the most manipulative bastards in that group of manipulative bastards. Michael is a selfish bastard, Cleese a control freak, Jonesy is shagged out and now forgets everything, and Graham as you know is still dead. I am the only real nice one!” – Eric Idle

With their dead parrots, holy grails and Spam, Monty Python revolutionised comedy for the rest of the world. They paved the way for everything from Saturday Night Live to The Young Ones to The Simpsons. Its founding members, including the supremely talented writers/performers John Cleese, Terry Gilliam, Terry Jones and Michael Palin, ushered in a new brand of surrealist comedy: a stream-of-consciousness sketch show that pushed the boundaries of format, style and content. Its legacy is not only important; it’s monumental.

In Monty Python Speaks!, David Morgan has extensively interviewed the entire world of Python – from producers and collaborators like Douglas Adams, to the founding members themselves – to create the ultimate record of Britain’s most revolutionary and successful comedy act. Packed with rare and never-before-seen photographs, and told with all the group’s customary wit and irreverence (and spam), this is the inside story of a comedy phenomenon.

Never before has the story of the Pythons been so brilliantly told, in words, rare and unseen photographs and hundreds of examples of removable and on-the-page facsimile memorabilia. The book recounts the story of all six members, from early days in the Cambridge Footlights, and farther afield, through early appearances on the BBC, global stardom, movie making, fights, reunions and death, to the final curtain drop in London’s O2 Arena in July 2014.

The “bits” are removable facsimiles of priceless artefacts from the official Python archives and the private collections of all members, and include hand-annotated scripts, previously unseen stills, film posters, programmes from classic shows, original items of animation artwork and more.

Monty Python’s Flying Circus: Hidden Treasures takes you closer to the comic creative powerhouse than ever before.

Monty Python’s best-selling album is re-tooled for its 25th anniversary, featuring songs and ditties drawn from across their illustrious recording, TV and film career (1969 – 1983).

The new versions include brand new tracks specially recorded by Eric Idle, long-forgotten gems from the Python archives, remixed Terry Gilliam cover artwork and a 32-page booklet with notes by Robert Ross from new interviews with the Pythons.

Homelessness Is Worst In Some Of London's Richest Boroughs, New Research...