Earlier in the day, the Duchess of Sussex skipped a few royal engagements to get some R&R at the exclusive Kingfisher Bay resort. After Prince Harry visited the McKenzie’s Jetty, he returned by boat to Kingfisher Bay. His wife, wearing a $218 Reformation Pineapple dress, received him at the end of the pier, walking with him hand-in-hand to greet the royal admirers.

Harry and Meghan met the Premier of Queensland, Annastacia Palaszczuk, before being welcomed by the Butchulla People, the traditional owners of the island (which they call K’gari).

Harry and Meghan looked delighted during the Welcome to Country smoking ceremony. The tour stop celebrated the dedication of the island’s rain forests to the Queen’s Commonwealth Canopy, a royal initiative aimed at building an international network of conservation programs.

(Fraser Island is the largest sand island in the world, with 206,970 acres of protected forest.) 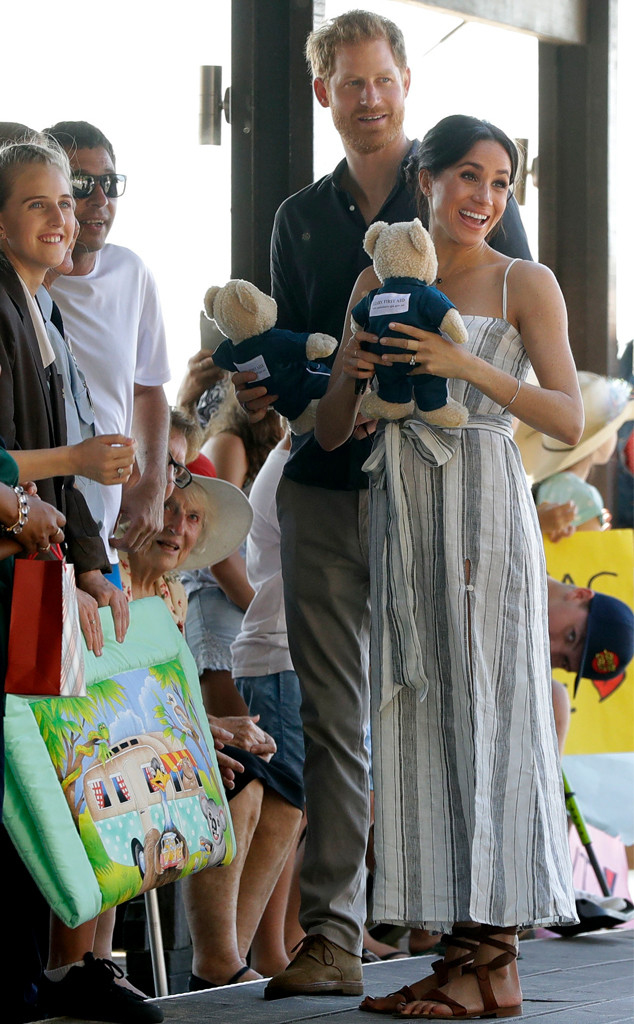 At one point, Meghan bent down to speak to Noeline Walk, 85, Fraser Island’s oldest and longest-living resident. “She asked me since I was local what I would suggest she have for tea. ‘Seafood, of course!’ I told her,” Noeline told reporters. “‘Oh, I’ll have to give it a try,’ she said.”

The 37-year-old duchess also chatted with another local resident: “Aunty” Joyce Owen, 87. “I told her a story about my father, which she loved, and I wished them every happiness in the world with their baby,” Joyce told reporters. “She said thank you and that they were so happy.”

Harry and Meghan’s 16-day royal tour will take them to Fiji Tuesday.

During his speech at the Invictus Games’ opening ceremony in Sydney, Australia, over the weekend, Harry thanked the locals. “Thank you for the welcome you have given Meghan and I over the last few days. I’ve been so proud to be able to introduce my wife to you,” he said, “and we’ve been so happy to be able to celebrate the personal joy of our newest addition with you all.”

Chris Pratt Is Amazed By Thandie Newton's Traditional Japanese | The...

Ataribox has a new name

The Drill review – a fragmented study of our modern fears

2018 Independent Spirit Awards: Everything You Haven't Seen on TV

Jimmy’s Jar of Pickles Photobombs Celebs on Live with Kelly and...

Mindy Kaling Gives Birth! Why She Was Always Destined for Motherhood