In the end, John McCain simply wanted what was best for his country.

The veteran U.S. Senator, whose most recent indelible mark was made with the silent downturn of his thumb on the Senate floor to signal his refusal to help repeal the Affordable Care Act, has died. He was 81 and had been battling brain cancer.

“Senator John Sidney McCain III died at 4:28pm on August 25, 2018,” a statement from McCain’s office reads. “With the Senator when he passed were his wife Cindy and their family. At his death, he had served the United States of America faithfully for sixty years.”

This heartbreaking news comes one day after McCain’s family released a statement, saying that he had chosen to discontinue cancer treatments.

“Last summer, Senator John McCain shared with Americans the news our family already knew: he had been diagnosed with an aggressive glioblastoma, and the prognosis was serious,” the statement began. “In the year since, John has surpassed expectations for his survival. But the progress of disease and the inexorable advance of age render their verdict. With his usual strength of will, he has now chosen to discontinue medical treatment.”

“Our family is immensely grateful for the support and kindness of all his caregivers over the last year, and for the continuing outpouring of concern and affection from John’s many friends and associates, and the many thousands of people who are keeping him in their prayers,” the family’s statement concluded. “God bless and thank you all.”

“I love my husband with all of my heart. God bless everyone who has cared for my husband along this journey,” Cindy McCain tweeted along with the statement. She later added, “The entire McCain family is overwhelmed by the outpouring of love and support from around the world. Thank you.” 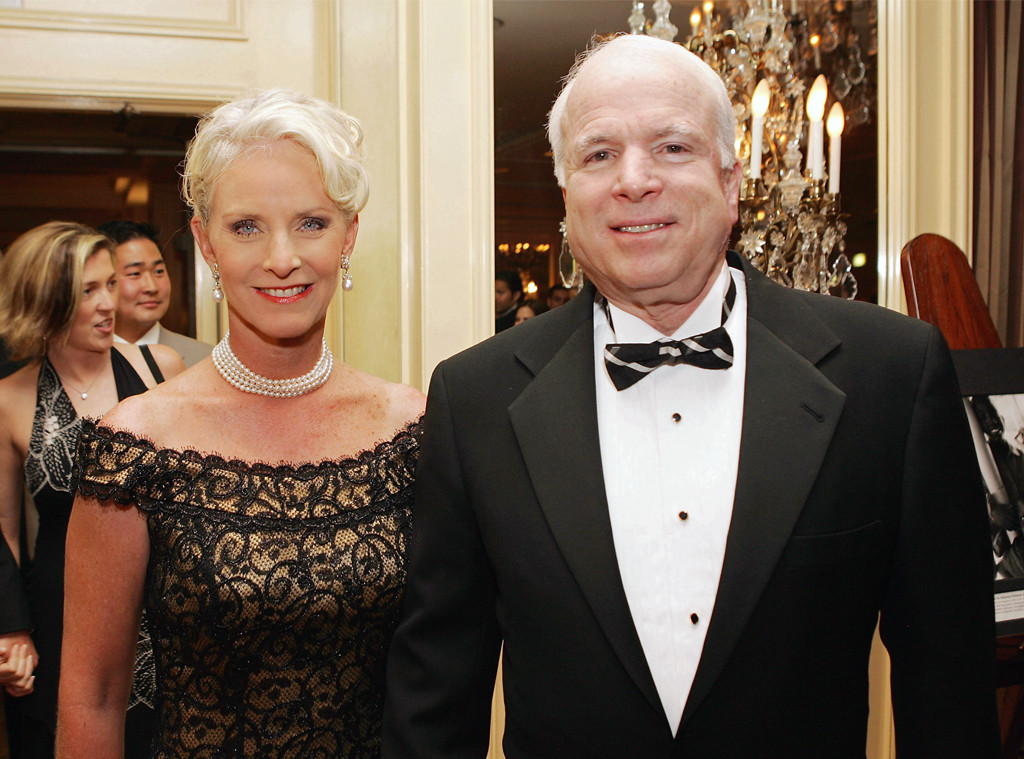 His daughter Meghan McCain, a political columnist and since last fall a co-host on The View, fast-tracked her wedding to Ben Domenech in November to make sure that her beloved dad was there to give her away. CBS News’ John Dickerson officiated and Clay Aiken sang.

“You’re really just living scan to scan. I wanted to make sure that he was—that we were all—there. Why wait?” Meghan explained to People afterward.

Still fighting but knowing the end was near, McCain contemplated his own legacy and his hopes for the future of the country he loved so much in his latest book, The Restless Wave: Good Times, Just Causes, Great Fights, and Other Appreciations.

“Maybe I’ll be gone before you hear this; my predicament is, well, rather unpredictable,” he said in the audiobook, which he recorded himself.

“We’re citizens of a republic made of shared ideals forged in a new world to replace the tribal enmities that tormented the old one,” he wrote. “Even in times of political turmoil such as these, we share that awesome heritage and the responsibility to embrace it.” 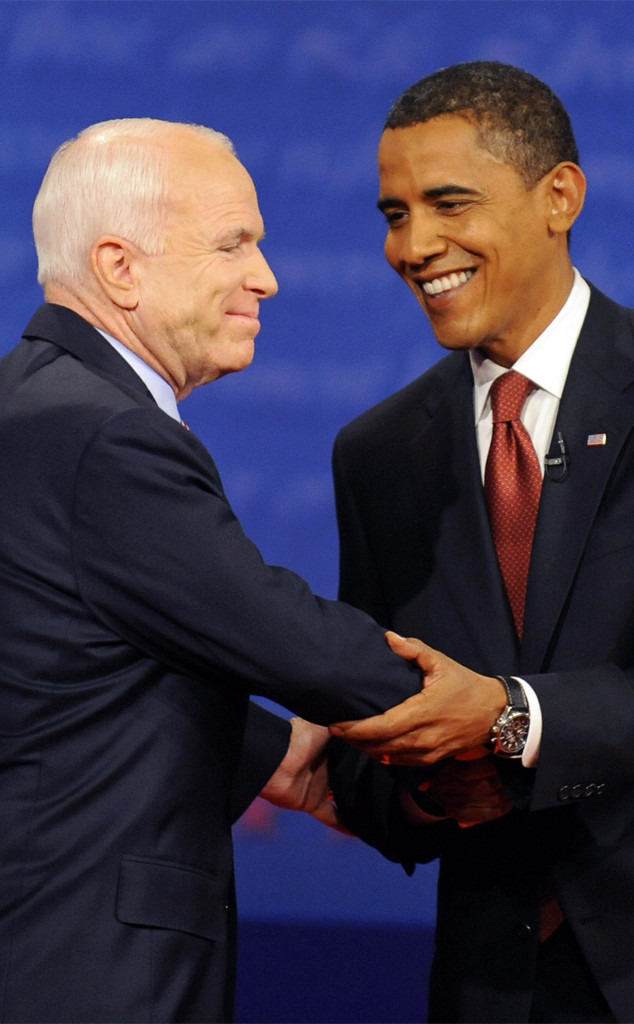 Something he—or not many others—could have predicted a few years ago was that McCain would spend the last two years of his life standing up for what he felt was the very core of U.S. democracy, a moral fiber under siege by the antics of President Donald Trump. Trump’s mocking of McCain’s military service while on the campaign trail seemingly would have been a deal-breaker in another era—and was widely castigated by Democrats and Republicans alike—but he obviously went on to become president instead.

John Sidney McCain III was born on Aug. 29, 1936, at Coco Solo Naval Air Station in the Panama Canal Zone to John McCain Jr. and wife Roberta Jean Wright. His father, who’d go on to become an admiral, commanded a submarine off the coast of North Africa and in the Pacific during World War II. After the war, he and Roberta and their three children settled in Virginia.

McCain followed in his father and grandfather’s footsteps to the U.S. Naval Academy at Annapolis and completed flight school in 1960. It was while flying his 23rd bombing mission over North Vietnam on Oct. 26, 1967, that he was shot down and captured by enemy troops. He went on to spend five years as a prisoner of war in Hanoi, enduring torture and suffering permanent damage to his right leg and both arms, which even after they healed he could never raise fully above his head again.

Most recently McCain’s experience as a POW led him to politely object to Trump’s nomination of Gina Haspel, a career CIA agent who at one point oversaw a U.S. “black site” facility in Thailand where torture occurred, for CIA director.

Though he eventually suffered enough to relent to filming an anti-U.S. propaganda video while in captivity, he famously refused release in 1968 until everyone captured before him was let go. Freedom wouldn’t come until March 14, 1973.

He had married wife Carol Shepp, a model from Philadelphia, in 1965 and adopted her two sons, Douglas and Andrew. They also had a daughter, Sidney, together.

But McCain’s marriage would never recover from his time away—or from his subsequent behaviour, which included a series of infidelities he more or less owned up to in his 2002 book Worth the Fighting For.

“Sound marriages can be hard to recover after great time and distance have separated a husband and wife. We are different people when we reunite,” McCain wrote. “But my marriage’s collapse was attributable to my own selfishness and immaturity more than it was to Vietnam, and I cannot escape blame by pointing a finger at the war. The blame was entirely mine.” 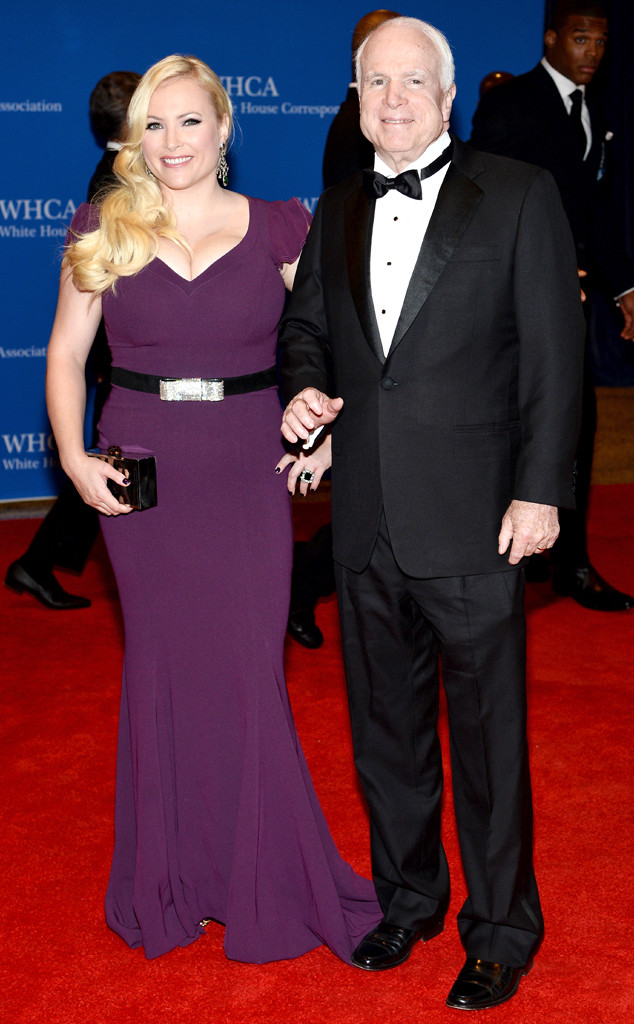 In Hawaii in 1979 for a military reception, McCain, 43 and still married, albeit separated, met 25-year-old Cindy Hensley, a cheerleader from Phoenix.

They both fudged their ages, Cindy claiming to be a little older and the naval officer pretending to be younger. “So our marriage is really based on a tissue of lies,” McCain wrote.

His first order of business was to secure a divorce.

“I attribute it more to John turning 40 and wanting to be 25 again than I do to anything else,” Carol, who remained on good terms with her ex-husband, is quoted in Robert Timberg’s book John McCain: An American Odyssey. She never responded to any of McCain’s divorce filings and in April 1980 a judge granted a default judgment and dissolved the marriage. John and Cindy married on May 17, 1980, with none of his children in attendance. (It would take a few years before they were on better terms.)

McCain retired from the Navy in 1981 and moved to his new wife’s home state of Arizona, where he was promptly elected to the U.S. House of Representatives as a Republican in 1982. He was elected to the U.S. Senate in 1987, filling the seat previously held by conservative icon Barry Goldwater.

He and Cindy also welcomed three children between 1984 and 1988, Meghan, John IV and James, and in 1991 they adopted daughter Bridget, whom Cindy had brought to the U.S. for medical treatment as a 3-month-old from an orphanage in Bangladesh.

His storied political career was pockmarked a few times by scandal, but McCain soon readily adopted the label of “Maverick” for his determination to push through bipartisan legislation and his unwillingness to just vote the party line—as became increasingly expected of him and many of his colleagues.

Though his name was on the GOP presidential short list for two decades beforehand, younger generations know him as a 21st-century figure. McCain unsuccessfully challenged George W. Bush for the Republican nomination in 2000 but acquired a new level of popularity.

He hosted Saturday Night Live in 2002 (with musical guest the White Stripes), and in a sketch playing himself opposite Darrell Hammond-as-Meet the Press-host-Tim Russert, he resists all of “Russert’s” tricks to get McCain to declare he was running for president again—of the U.S., Iraq, anywhere.

A 72-year-old McCain did in fact run for president again in 2008. He secured the GOP nomination fairly easily but was derailed in the general election by both his pick of then-Alaska Gov. Sarah Palin as his running mate and by the inspiring candidacy of Illinois Sen. Barack Obama.

McCain probably didn’t think at the time, either, that he would be fondly remembered for just how not awful he was to his opponent. Video of him defending Obama as a “decent person” still goes viral to this day when someone wants to contrast the political climate now to what it was not so long ago.

Late-night comedy also made much of the grandfatherly McCain going up against the younger, hipper Obama. Hammond played him as a straight-arrow, even-tempered fellow who was trying to keep up with the level of energy Obama was bringing to the table. But sort of like in real life, even Hammond’s impression (not much talked about in lieu of his classic impressions of Bill Clinton and Donald Trump) was overshadowed by Tina Fey‘s inevitable portrayal of Palin.

Last July, McCain returned to Washington, D.C., days after undergoing surgery, to vote no on a bill that would repeal so-called Obamacare, his 2008 opponent’s hallmark legislative achievement in office. He was hailed as a hero—a true “maverick”—by opponents of the bill and Trump never forgave him.

“Among the people who called to thank me was President Obama,” McCain wrote in The Restless Wave, noting that Obama hadn’t reached out regarding the healthcare vote beforehand and had last called to congratulate him on his re-election to the Senate in 2016. “I appreciated his call but, as I said, my purpose hadn’t been to preserve his signature accomplishment but to insist on a better alternative, and to give the Senate an opportunity to work together to fine one.”

Either way, it was more than most of his Republican colleagues were willing to do.

In his final months, McCain had been receiving a steady stream of calls and visits from friends and loved ones at his 15-acre Hidden Valley Ranch in Arizona.

The New York Times reported in May that McCain had let it be known he preferred that President Trump not attend his funeral service at the National Cathedral in D.C.

How To Be Funny At School Or In Front Of Your...

HTC U11 Plus hands-on review

The Remains of the Day review – Ishiguro's novel makes cerebral...

'All I Want for Christmas' Carpool Karaoke