Heading into this year’s Golden Globes, Bohemian Rhapsody was anything but a sure thing.

Sure, the biopic, which chronicles Freddie Mercury‘s ascendancy to superstardom as the beloved flamboyant frontman of Queen with Mr. Robot star Rami Malek in the lead role, was a massive box office success, grossing over $743 million worldwide and becoming 2018’s eighth-highest-grossing film of the year—the only one on the top 10 not either based on a comic book or part of a franchise. But up against the likes of A Star is Born, Black Panther and If Beale Street Could Talk, plenty of award season pundits believed the film lacked the range to go all the way. After all, the film only has a 62 percent “fresh” rating on Rotten Tomatoes and is rife with historical inaccuracies.

So imagine everyone’s surprise as we cut to Sunday night in the Beverly Hilton ballroom and Malek beat out presumed frontrunner Bradley Cooper for Best Actor in a Motion Picture—Drama moments before the film truly upset the apple cart and walked away the Best Motion Picture—Drama winner.

But as unlikely as its big wins may have seemed, the film’s chances of even making it to theaters seemed even unlikelier over the years as the production slogged through development hell and lost its controversial director halfway through shooting.

Bohemian Rhapsody‘s road to victory? In a word, torturous.

Queen fans first got wind that Mercury’s story might be making its way to the big screen way back in 2010 when the band’s legendary guitarist Brian May revealed plans to the BBC. Back then, Borat star Sacha Baron Cohen was attached to play the larger-than-life singer, who died of complications from AIDS in 1991 at the too-young age of 45. As May explained, the comedian had been “on this project since we started talking about it seriously with [Front/Nixon screenwriter] Peter Morgan a couple of years ago.”

As May told the UK’s Daily Record a year later, the band’s surviving members (which include drummer Roger Taylor and bassist John Deacon, who parted ways with May and Taylor shortly after Mercury’s death before retiring from the music industry for good in 1997) approached the idea of a biographical film with much hesitation.

“Obviously, we go into it with a great amount of enthusiasm but also a certain amount of caution because Freddie’s legacy is very precious and we have a great responsibility not to mess it up. It is more about Freddie than it is about us and that is deliberately so,” he explained. “We have resisted making this film for a long time and it is only now we feel we have the right people that we have given it the OK.”

As May went on to explain, it was Cohen’s enthusiasm for the project that won them over in those early days. “Sacha does seem perfect. If it hadn’t been for Sacha pushing and pushing, we wouldn’t be at this point. We didn’t choose him. He chose us,” he admitted. “He is passionate about playing Freddie. For years, he’s been saying he is going to do it.”

Despite the fact that May and Taylor had signed on as producers, with intentions of also handling the film’s music, convinced not only by Cohen but executive producer Graham King as well, Morgan—who, it’s important to note, was brought aboard by the actor—was quick to note he had no intention of writing a puff piece as he recreated the history of the band. “I’m not sure how much they’ll like what I write,” he told Cinema Blend in 2010. “I think they’ll recognize the truth in it, but it’s a series of painful memories for them. I’m essentially writing about the most painful time in the bend’s history.”

However, by 2013, it was clear who was in the power position on the film as Deadline reported that Cohen was departing the project after clashing with May and Taylor, who had script and director approval. According to the report, Cohen wanted the film to be a “gritty R-rated tell-all” centered around Mercury’s life, while the band wanted to make “more of a PG movie.”

Cohen wouldn’t open up about his departure until 2016, when he told Howard Stern that he didn’t want to hold back in showing Mercury’s “extreme lifestyle.” “They are a band, and they want to protect their legacy as a band, and I fully understand that,” he said, adding that he’d regretted continuing past an initial meeting in which an unnamed member of the band suggested that Mercury’s death come at the midway point of the film, with the second half chronicling how the surviving members continued on.

“I said, ‘Listen, not one person is going to see a movie where the lead character dies of AIDS and then you see how the band carries on,'” Cohen recounted.

May, however, took issue with Cohen’s version of events, telling The Guardian, “Sacha became an arse. We had some nice times with Sacha kicking around ideas, but he went off and told untruths about what happened.”

Whatever the case, the hunt for a new leading man was on and soon Ben Wishaw, who coincidentally took home a Golden Globe this year as well for his work in the BBC One miniseries A Very English Scandal (available in the States on Amazon Instant Video), was said to have been tapped as Cohen’s replacement, with Dexter Fletcher attached to direct. But as the actor told Time Out London in 2014, issues with Morgan’s first draft—the one he wasn’t sure the band would like—were holding things up. (Not to mention the little wrinkle that Fletcher quickly backed out of the project, citing creative difference with King.)

“Actually, I don’t know what’s happening, it seems to be on the back-burner,” he said. “It was going, then there were problems getting the script working.” 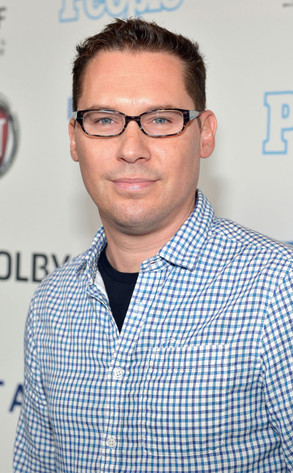 With May and Taylor now firmly in the driver’s seat, Morgan’s script needed to be adjusted to fit their view of what the film should be and, in November 2015, Deadline reported that Anthony McCarten (who wrote the Oscar-winning Stephen Hawking biopic The Theory of Everything) had been hired to take a pass at it.

Despite May’s stated hope that Whishaw, whom he called “a real actor” as a dig toward Cohen, would take the role, Malek was formally announced as the lucky actor who’d be taking on Mercury, teeth and all, in late 2016, with Bryan Singer stepping in as director. And from there, the story became less about what sort of film Bohemian Rhapsody would be and more about whether it would ever complete filming.

With just weeks left to go, the director—already a controversial choice on behalf of 20th Century Fox due to multiple accusations of sexual assault, claims which Singer has denied—was released from his duties with production halted due to his “unexpected unavailability.” According to a report by The Hollywood Reporter, Singer had gone missing during production on several occasions, prompting Malek to complain to the studio, leading to growing tension between the director and his star.

When Singer did not return to set after the Thanksgiving break, cinematographer Newton Thomas Sigel was forced to step in and direct several days of shooting before production shut down and Singer was ultimately fired.

In a statement released to Deadline, however, Singer disputed the report, stating he was providing care for an ill family member. “With fewer than three weeks to shoot remaining, I asked Fox for some time off so I could return to the U.S. to deal with pressing health matters concerning one of my parents. This was a very taxing experience, which ultimately took a serious toll on my own health. Unfortunately, the studio was unwilling to accommodate me and terminated my services. This was not my decision and it was beyond my control,” his statement read. “Rumors that my unexpected departure from the film was sparked by a dispute I had with Rami Malek are not true. While, at times, we did have creative differences on set, Rami and I successfully put those differences behind us and continued to work on the film together until just prior to Thanksgiving. I wanted nothing more than to be able to finish this project and help honor the legacy of Freddie Mercury and Queen, but Fox would not permit me to do so because I needed to temporarily put my health, and the health of my loved ones, first.”

Days later, it was reported that Fletcher would return to the project to oversee the last few weeks of filming before shepherding the project into post-production. However, due to semantics with the Director’s Guild of America, Singer retained the “Directed By” credit. (Fletcher was granted a producer credit for his troubles.)

With the film still on target for an October 2018 release date thanks to Fletcher’s last-minute addition, the press tour for Bohemian Rhapsody became consumed with reporters attempting to get Malek and his co-stars Lucy Boynton (who made a love connection with Malek while filming), Joseph Mazello, Ben Hardy, and Gwilym Lee to comment on the director debacle, not to mention accusations that the film, under May and Taylor’s direction, had straight-washed Mercury’s queer identity.

To their credit (or fault, you decide), they never took the bait and the lingering questions about Singer followed them all the way to the Beverly Hilton this weekend, when the winning team was confronted backstage with questions about their director who earned nary a mention in either Malek or King’s acceptance speeches.

“Not something I really should talk about tonight,” King replied when asked whether they shared the award with him that evening. (Singer sure felt they did, as he shared a BTS photo from the set, with him in his director’s chair, captioned “What an honor. Thank you #HollywoodForeignPress.”)

As another reporter asked if they felt it wasn’t appropriate to mention Singer on stage, Malek responded, “There’s only one thing we needed to do and that was to celebrate Freddie Mercury in this film. He is a marvel. There is only one Freddie Mercury and nothing was going to compromise us giving him the love, celebration and adulation he deserves.”

King added, “Every single person that worked on this film collaborated and did it out of the passion of making this story. That was everybody.”

With Oscar nominations set to be announced Tuesday, Jan 22, all eyes now turn to the Academy to see whether or not Bohemian Rhapsody‘s surprising upsets were a one-off, something to chalk up to the HFPA’s noted love of the outsider and, often, the non-American story—they are the Hollywood Foreign Press Association, after all—or if the film, like Mercury once sang, is truly guaranteed to blow award season pundit minds.

Be sure to watch E! on Monday, 7th of Jan. starting at 8 p.m. for our Live From the Red Carpet: The 2019 Golden Globe Awards coverage!

The Best 9 Dollars You’ll Ever Spend…

The sardonic joy of the Black Country, where no one is...

Jimmy’s Jar of Pickles Photobombs Celebs on Live with Kelly and...

Julia Stiles, Chrissy Teigen and More Celebs Who Clapped Back at...